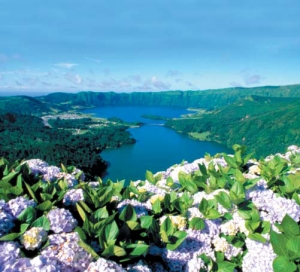 What does the word “Azores” make you think of? For me it has associations of Storms, Sailing Ships and Pirates, and as it turned out, I wasn’t far wrong. Geo Fradgley is a great fan of The Azores having holidayed there many times, and on a cold wet night in February he came to share his enthusiasm for them with Capel Ladies.

Geo told us about the volcanic origins of this chain of nine islands, which lie above the Mid-Atlantic Ridge 930 miles west of Lisbon, and were formed from the cooling lava of huge undersea eruptions. The Azores have appeared on maps and charts since 1351, and many different peoples have landed on their shores over the centuries, from early settlers to famous explorers as well as pirates! Today they belong to Portugal, so technically they are part of Europe!

The geography of the islands is beautiful and diverse, with steep-sided cliffs, dramatic coastlines and very fertile soil. A number of village settlements are actually situated within extinct volcanoes, in the sunken volcanic basins, or calderas, so their inhabitants must be pretty convinced that there are no eruptions imminent! The Azores mountain peaks, measured from the sea bed, are some of the tallest on the planet, the very tallest of these being Mt Pico, at nearly 8,000 ft. above sea level.

The islands were originally covered in scrub and forest, but much of this was cleared for farming so there is now very little of this early vegetation left. Hydrangeas, originally planted by the farmers as field boundaries, are found everywhere and have to be kept in check. Nevertheless they make a beautiful sight in the landscape, along with giant tree ferns and exotic flowers!

The coastal waters of the islands are now a protected reserve for whales, and Geo told us that they are a frequent sight as they leap and spout in the seas around. Many types of dolphin are also seen around the coasts.

Ferries are the main form of transport between the islands, and there are very few cars or roads. Because of this Geo loves holidaying there, as he uses the many walking trails to explore the landscape and enjoy the views.

The temperate climate (75ºF is the average summer temperature) along with the lack of cars and the idyllic flora and scenery mean that tourism has replaced much of the traditional crop-growing, and is now the main income for the inhabitants of the Azores. Each island has its own annual flower festival when the streets are carpeted with flowers arranged in colourful patterns. Almost every island has hot springs and pools, and the locals sometimes use these hot spring hollows to cook their food in!

I think we were all wishing ourselves there as we sat listening to Geo in the library while the icy north wind howled round outside!