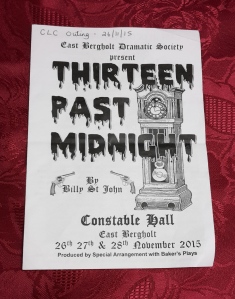 A party of 20 Capel Ladies went to see the latest production by the East Bergholt Dramatic Society at the Constable Hall at the end of November. It turned out to be an evening of laughter, shocks and surprises as the sixteen cast members displayed their talents, taking us through an eventful plot which included 2 actual murders and a number of attempted murders! The main victim was the producer of a T.V. soap who was looking to raise the ratings for his show by including a murder which would kill off one of the characters.

He decides to stage the dry run at his home, in the form of a murder mystery night, inviting everyone from the cast and crew to dinner, and then explaining his plan which would swing into action after midnight the same evening. At this point he also announces to the whole assembly that he will be divorcing his wife and eloping with a member of the cast in the near future.

Just as he had foreseen, the feelings of hostility towards him escalate, as each person feels that they could be the cast member axed from the show, and his wife is equally furious with him. Everyone is given a weapon of some kind, and a life-size dummy of their host is placed in the living room as a target. The guests disperse around the house and the action begins.

One by one each person secretly enters the living room and “murders” the dummy using whatever means they have to do so. However, there is a twist in the plot, and their host is murdered for real in the darkness. As they are locked in the house and cannot leave until morning, they each wonder who has really killed their producer, and when one of them stumbles upon the killer she herself is also murdered. Thankfully there is a Private Investigator amongst the guests, and it is he – ably assisted by one of the maids – who solves the crime before the police arrive.

All in all it was a most enjoyable evening out, and a great performance by the players, who kept us on our toes and amused or shocked throughout! I don’t think any of us guessed who the murderer was, either!