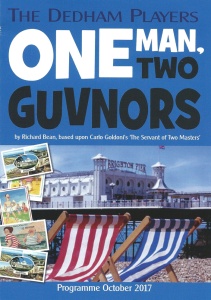 A small group of Capel Ladies went to the Assembly Rooms in Dedham to see a production of “One Man, Two Guvnors” performed by the Dedham Players.

This is a quirky, crazy farce, set in 1960’s Brighton, and involves Francis Henshall, an out-of-work musician, who ends up working for two different bosses – one, a supposed gangster and the other, an upper class fool – whilst trying to stop them from meeting each other and discovering his ploy. Further complications occur involving a heavy trunk, mixed-up letters, an elderly waiter and several unlucky audience volunteers! By the end of the play Francis has managed to hold down both jobs, whilst getting paid and fed, and finally finds love. It’s a happy ending, too, for the other characters, who have also gone through an equally confusing time! A real romp with some energetic performances! A very entertaining evening!