The 2018 A.G.M. was attended by 21 members of Capel Ladies Club, six of whom were current committee members.

After welcoming everyone to the meeting Chairlady Di Barker gave her annual report. She said it had been another successful year with some good speakers and members had enjoyed meals out, social and the annual Barbecue. However, although a number of outings had taken place throughout the year they had not been particularly well attended. The main exceptions to this was our Christmas shopping trip to Bury St Edmunds and the Mystery Tour round Suffolk. Di said perhaps it was time to reconsider the number of outings arranged each year as it was quite a lot of work if only a handful of people wanted to go on them. Wendy Keeble commented that it was a shame that a minority of interested people who wanted to go on trips and visits should have to forfeit these because of the great majority’s disinterest.

Di went on to thank everyone who had helped the club in some way over the year: Val and Dorothy for setting out the tea things each meeting; Linda Morrison for putting round our posters; and each individual committee member for their various roles. Secretary Sue Woolgar received special thanks, and also mentioned was Nick Woolgar, Sue’s son who puts reports and photos on our website, www.capelladies.com

Treasurer Liz Gulliver was also thanked for her hard work, and John Bloomfield too for auditing the accounts. Sue and Liz were leaving the committee this year but there were two new volunteers to join. These were Sue Crane and Beryl Backler, who were both proposed and seconded on to the 2018 team.

Of special note was this, our 50th Anniversary year, and Di announced that the club would be holding several special events to mark this. The committee was yet to finalise this year’s programme but all would be revealed as time went on.

After the main business of the evening there were refreshments with home-made cakes baked by members of the committee and this was followed by a “Backwards Raffle” which turned out to be great fun and was a jolly way to end the evening! 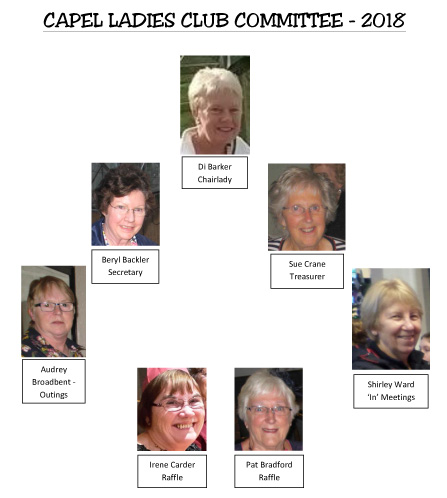