Chris Matthews was our September speaker on The History of the Co-op Movement. He began by saying that he grew up in London where he got his first job at 13, delivering newspapers for his local Co-op.  Now here he is in his thirties still working for them as the Manager of Woodbridge Co-op & a Director of some aspects of the work the Co-op does in this area. 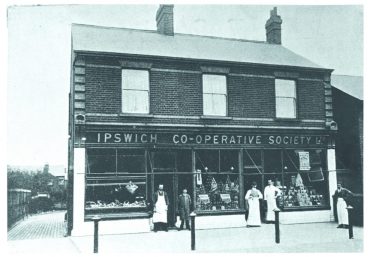 The Co-op movement was started by The Rochdale Pioneers, a group of twenty-eight people (one of whom was a lady), who decided that the rich merchants were taking advantage of them by adding ingredients to products to make them weigh more, to the detriment of the quality of the goods.  They started in 1844 calling themselves the Rochdale Society of Equitable Pioneers. They struggled to amass £28 over four months, but were able to open a warehouse from which to trade at 31 Toad Lane, Rochdale, on 21st December 1844.  They traded in flour, butter, sugar, oatmeal and candles, and soon expanded to include tea & tobacco, all goods sold at fair prices.

Chris told us that The East Anglian Co-operative Society follows the same principles as the pioneers in that they do what is right for the people. It was started by John Castle of Essex in 1861, later joined by George Heinz of Ipswich in 1867. Together they opened a little shop at 34 Carr Street, Ipswich, which was registered on 3rd March 1868, and was later to transform into the flagship Co-op Department Store. Eventually Boss Hall Farm was bought to supply dairy products in Ipswich. The first official Co-op Supermarket was the Solar Store (now Morrisons) that was eventually built on the same site.

The East of England Co-op is now made up of 150 stores across Norfolk, Suffolk & Essex, and – as in the old days – customers can still become shareholders by paying a membership fee of £1 which entitles them to an annual dividend payout.

The Co-op is still a great supporter of local communities. They promote local food producers and source many of their goods from our region. In addition they have a number of good causes which they support and they pride themselves on being a business for people and communities not just for profit.

The Co-op was the first company to introduce degradable plastic bags, and they led the way in introducing Fair Trade products such as bananas, tea, coffee, sugar and chocolate.

Chris brought several bars of Fair Trade Chocolate for us to sample, and it was passed around and duly devoured. He was an extremely good ambassador for the Co-op, and we all enjoyed his talk and his chocolate!