Unfortunately for our group of intrepid members, the evening of 15th October was a rather damp and cloudy one. They were on a visit to the Observatory at Orwell Park School, and so were hoping for a clear dry night!

Nevertheless, the trip went ahead, and they bravely climbed the 100 steps to the top of the tower where the telescope is housed. 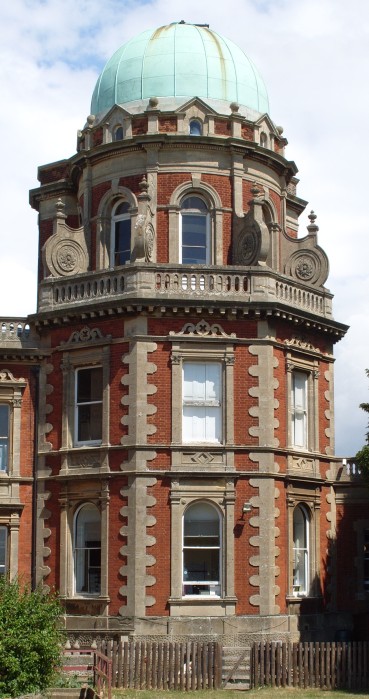 The Orwell Park estate on which the observatory stands has been the home of some influential and flamboyant characters from the 18th and 19th centuries. The first of these was Admiral Vernon, who built the original mansion in 1725.

The second was Colonel George Tomline. He was educated at Eton and had several scholarly friends; amongst them Gladstone, Disraeli and Peel. He bought the Orwell Park Estate in 1848, adding 20,000 acres of land to it, and rebuilt the mansion in Victorian red brick. He also built the Ipswich to Felixstowe railway, and began work on the site of the present Felixstowe Docks. He was a keen amateur astronomer and commissioned Wilfrid Airy, son of the then astronomer Royal, to design and build the Observatory. The ornate brick tower is topped by a copper dome lined on the inside with mahogany. The building was completed in 1874.

Tomline engaged the services of a full-time professional astronomer named Isaac Plummer in February 1874, and his observations and publication of results gained the observatory a worldwide reputation for astronomical study at that time.

The telescope has a 10 inch object glass made by Mertz of Germany, and sits on a 55 foot supporting pillar, 8 feet in diameter. It is thought that the local firm of Ransomes was employed in installing this equipment, a complex task of precision engineering. The original clockwork mechanism for turning the telescope still works, although today it is powered by electricity. When the tower was first built there was a four-stage water-powered lift for easy access, but this had to be dismantled in later years due to its deteriorated state.

Our gallant group of ladies, having made it up the 100 steps of the spiral staircase, listened to a very informative talk by Paul Wilding, the Visitors’ co-ordinator, and then took turns to look at the images that could be seen on what was a rather cloudy night. As the sky was not visible the telescope was turned on the surrounding area and it was possible to pick out the River Orwell, Pin Mill and the Butt & Oyster inn. Shame about the weather, but still a very interesting and informative evening.

The telescope is now used regularly by the pupils at Orwell Park School, and by the Ipswich Astronomical Society, who keep both it and the dome in good working order.

David Fincham’s noisiest neighbours must be the seabirds and the waves crashing onto the pebble beach where he lives with his wife. He is a National Trust Coastal Ranger and acts as caretaker of the shingle spit off Suffolk’s coast known as Orford Ness.

Orford Ness is an internationally important site for Nature Conservation. Among its various titles, together with Havergate Island it is part of a ‘Site of Special Scientific Interest’, an ‘Area of Outstanding Natural Beauty’ and is listed as of national importance geologically.

This seems hardly surprising as the spit comprises a number of valuable habitats for all kinds of wildlife – plants, birds and animals. These include rare wild flowers, plants and lichens; several species of birds of prey; a wide selection of seabirds and waders; many types of insects, a colony of lizards and mammals of all shapes and sizes including grey and common seals, along with a large herd of Chinese Water Deer. 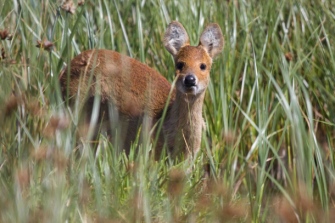 Its remoteness made it ideal for secret wartime operations, and in 1929 the site was selected as the location for the Orfordness Beacon, one of the earliest experiments in long-range radio navigation which eventually led to the invention of radar. The Atomic Weapons Research Establishment had a base on the site, used for the environmental testing of components to be used in bombs, and the long buildings known as the “pagodas” were used for these experiments. Their roofs were designed to collapse inwards in the event of a serious accident, sealing the whole building with a lid of concrete and shingle.

The site was still owned by the Ministry of Defence in the 60s, all through the Cold War, and in the late 60s a top secret Anglo-American radar installation known as Cobra Mist was set up there. This closed in 1973 and from then on the site was used as a transmitting station run by the Foreign Office, and then in more recent times by the BBC’s World Service. The station has been disused since May 2012.

Orford Ness is now owned by the National Trust and is open to the public. Access is strictly controlled both to protect the fragile habitats and because of the continuing danger from the site’s former use by the military. You can get there by National Trust ferry from Orford Quay on designated open days. Visitors must keep to the tracks so as not to damage or disturb the wildlife, but from David Fincham’s account it is certainly worth the trip to enjoy the sights, sounds and atmosphere of this amazing place which sits right on our very doorstep!