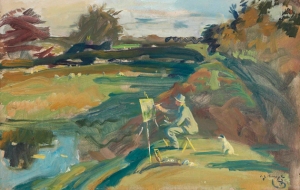 On a beautiful early autumn afternoon a small group of Capel Ladies went to visit the Alfred Munnings Museum at Dedham. If you have never visited here it is well worth the short trip. 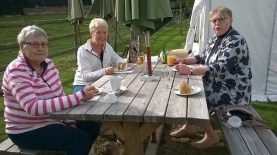 We all enjoyed looking at his paintings, many of horses, which were his first love, but also landscapes – a number of which were local scenes of Dedham Vale and the River Stour. There was also a special exhibition entitled “Munnings and the River” which included a lovely series of pictures showing ladies boating on the Stour at Flatford. Everything is well explained with clear information to read, and very helpful Guides in each room.

The house – which was Munnings’ well-loved home, is also very interesting, with much of his original furniture, books, sculptures and china still there, exactly as it was in his lifetime. After a pleasant time in the house we moved on to his studio to see where he painted, with more exhibits in here too.

The afternoon finished with our group enjoying delicious, very generous pieces of cake sitting outside in the Garden Café, watching the horses in the adjoining field – rather apt considering Munnings’ love of horses. You can find out more about the museum by visiting its website: www.munningsmuseum.org.uk

Capel Ladies were delighted to welcome back Jenny Gibbs, along with her partner Mustapha, to talk about the Ottoman Empire, the  Hidden Treasures of Istanbul and a Glimpse into the Harem. Jenny wore a traditional costume with head dress, pantaloons and apron, and a gorgeous sparkly top. She gave us a quick introduction as to how she came to live in Turkey for twenty four years, having fallen in love with the country after a brief holiday there. She lives in a two hundred year old farmhouse, which is apt because – as the Ottoman Empire only ended in 1923 – her home is an Ottoman house.

The Empire was created in 1299, and from the 15th to 17th centuries was the largest empire in the world. The Ottomans came from Mongolia and while some went to Turkey others went to Finland, which is why there is a similarity in their languages. Eventually Istanbul became the centre of the Empire. The Palace there is magnificent and covers 173 acres. All the roofs are domes, and the walls are covered in ceramic hand-painted tiles. The kitchens are vast as they would have served upwards of 10,000 people.  Jenny has visited the palace  several times as it takes many days to see it all.

The Harem in the Palace was also very large. Harem means women’s quarters and this is where all the women in the palace lived. The Sultan was allowed four wives, while other men could have seven! These would all be Turkish but his concubines, usually about eight hundred of them, would come from conquered nations. They would be the most beautiful girls, and in the harem they were well educated, taught to play music, dance, sing and do exquisite embroidery. Each girl would have her own servant and there were also about four hundred eunuchs to keep order, so you can understand why it was so large with that many people there! A sad fate awaited these women, however. When a Sultan died all his concubines would be killed – often weighted down with stones and thrown in the Bosphorus! Fortunately this practice died out as the centuries passed.

It wasn’t too good to be the son of a sultan either, since only one son could take over when his father died. They often killed all their brothers to ensure no one tried to depose them! Later on this custom, too, died out and the brothers would be put in a special place known as the Cage to live out their lives. Although called a Cage it was a good life with every luxury and plenty of concubines too. However the brothers were never allowed out and frequently went mad.

Jenny went on to tell us about some of the buildings in Istanbul including the fabulous mosques, The Grande Hotel de Londres, built for the passengers of the Orient Express in 1892, remains unchanged to this day and is often used by film companies. She also described a vast underground cistern where water had been stored and they had used Greek and Roman columns to support the roof, but many of these were put in upside down! She said it was beautifully cool in there after the heat of the streets.

Jenny brought with her examples of Ottoman clothing as well as scarves, tablecloths and bags to sell, all very beautiful and eagerly bought by our members. We look forward to the next time Jenny comes, she is always a delight to listen to.