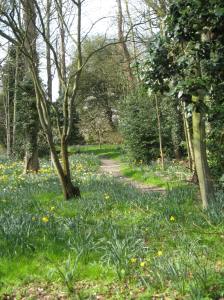 The sun was setting in a blaze of fire as we left Blakenham Woodland Garden on a Thursday evening in mid-April.

The garden is exactly what it says – a woodland garden, located in a seemingly natural woodland setting at the edge of a Suffolk meadow. As we passed through the gate on arrival we heard a woodpecker drumming in woods not far away, and birdsong filled the air. It was the perfect visit for a spring evening.

The garden was created from the 1950s onwards by John Hare, then MP for Sudbury and Woodbridge, who bought the wooded hill next to his house in 1951.

He had always dreamt of creating a wild garden, and he started by clearing the brambles and nettles and opening up paths and glades. He discovered that the garden’s acid soil was just right for growing camellias, azaleas and rhododendrons, and he also collected many unusual and exotic specimens via his close friend Sir George Taylor, who was at that time director of Kew Gardens.

His vision was to create an oasis of peace and tranquillity where he could escape the hustle and bustle of his busy political life. When he died in 1982 the garden was made into a charitable trust in order to preserve his unique collection.

His son Michael carried on his father’s dream, and so it is today, with the new management of the gardens trying to strike a harmonious balance between what is natural and what is the cultivated part of this unusual collection of specimen plants. Drifts of bluebells and wild flowers combine with magnolias and bamboo. There are Chinese rock specimens, rustic huts and benches, a spiralling grass maze which delves into a chalky hollow – and where, we were told, intimate musical evenings are sometimes held.

Fences have been erected to keep out deer and rabbits who would otherwise feast on the exotic greenery, but badgers have their own special built-in entry and exit for access to their sett which pre-dates the garden! However, their boundaries are strictly marked by an electric fence to prevent any further invasion!

We were shown round the garden by Dave Hardwick, who has worked at the garden for most of his life, and whose interest and affection for it certainly came across to our group. We left at dusk to the sound of birdsong and the rustling of the leaves. What a relaxing and tranquil place!