Woodcarver Maureen Midwinter grew up in an artistic family as her father was a cartoonist, and she always loved to draw. However it wasn’t until after her children grew up and left home that she decided to give up her career as a nurse and take up the hobby of woodcarving. She told us she had been inspired after finding a piece of tree root shaped like a snake in Beddgelert Forest whilst on holiday in Wales.

Maureen trained at Suffolk College to begin with and then moved to London where she lived in a cold, semi-basement in Kennington as a student, taking her City & Guilds exams at the London School of Art. It was back to basics, with lots of drawing and lettering practice – lettering is a vital skill used all the time by anyone carving in stone or wood. She had to produce a sample piece of work which had all the letters of the alphabet in, and she carved them in a jumbled group with the word “CONFUSED” standing out amongst them.

Maureen has amassed her own collection of 125 tools, some of them very old. Each one has a different function, and a different way of being sharpened – also a skill! She told us all about the lengthy processes of producing a piece of sculpted wood and the different methods of treating and colouring it to create the finished item. Sometimes she uses gold leaf which is very delicate and feather-like and very painstaking to apply. She has also used silver and coloured plasters of various complicated mixes to give different effects, depending on what she is making. 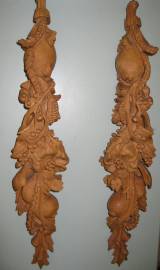 She uses different woods – including oak, yew, acacia, lime, box and mahogany. Each is suitable for a particular purpose. Amongst the things she has created are replacement carvings for ones which were missing or fire-damaged, in buildings such as Brighton Pavilion, St Paul’s Cathedral and Hampton Court. She has made carved frames for pictures and mirrors, a bench-end to replace a damaged one in St Mary’s Church, Great Bealings, and a wonderful coat-of-arms for the Worshipful Engineers Company to go in their Hall in the City of London. My personal favourite was the village sign for the Bealings villages. It has a front and a back, one showing Great Bealings and one Little Bealings, with their churches and other village features clearly shown. What a talented lady!