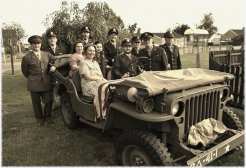 Our first meeting in July was a visit to the latest show by The Orchard Players in Capel Community Centre. As usual the show didn’t disappoint!

Set in a small Suffolk village during World War II, wartime romance blossoms when local girls Charlotte and Jane fall for two American pilots from the newly-built airbase nearby. Charlotte marries her sweetheart and moves to New York, but Jane is left pregnant and in limbo as her pilot is reported missing in action.

Ten years on and Jane, now widowed and with a son, decides to visit Charlotte in NYC, and while she is there a chance meeting in the bar run by Charlotte’s husband puts her life on track again, and everything is resolved.

The original story, conceived by Orchard Players’ members, and scripted by Bex Nicholls, flowed effortlessly along, accompanied by Big Band style music, songs and dances, all seamlessly merging with the action.

With a cast of over 40 performers, including around 15 children, it must have been a huge undertaking to organise – and every single performer earnt their place on the stage! The singing was brilliant, (to a pre-recorded sound-track) as was the dancing – by ALL ages and abilities, and the costumes were amazing! How that large cast managed to bring it all together so well without a single hitch was just incredible – the team of backstage helpers did a stunning job!

All I can say is – if you didn’t get to see it, you missed a fantastic show! Well done again Orchard Players! Please reserve me a ticket for next summer’s show too!